Michael Cyger threw yet another great industry meetup last night in Kirkland, WA (just outside Seattle), with about 90 domainers from all levels gathering at the new GoDaddy expansion space overlooking Lake Washington. Rightside’s DJ STATN, famed for his performances at both the Rightside Opening Reception and Uniregistry’s Hakkasan party during NamesCon 2016, provided music to kick off the first hour of networking, snacking and drinking. 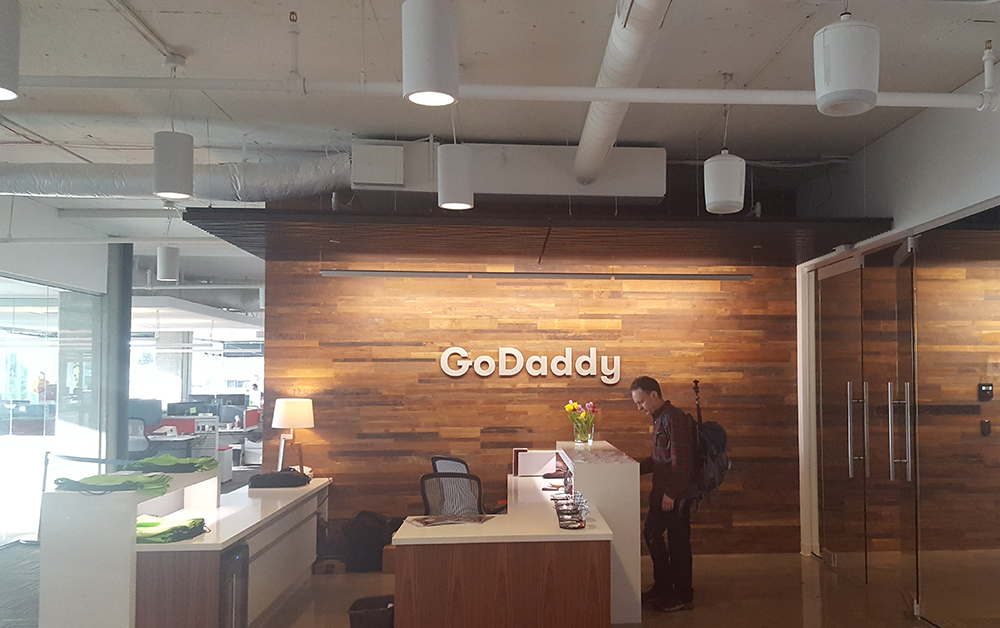 There were many familiar faces in the crowd, and several people had traveled cross-country to attend the event. We were equally surprised to speak with a few attendees who regrettably hadn’t been to a NamesCon before, and to those individuals we say this: send your bosses our way and we’ll outline all the reasons why you need to be at NamesCon 2017! We are also offering a special registration discount for DNSeattle attendees. 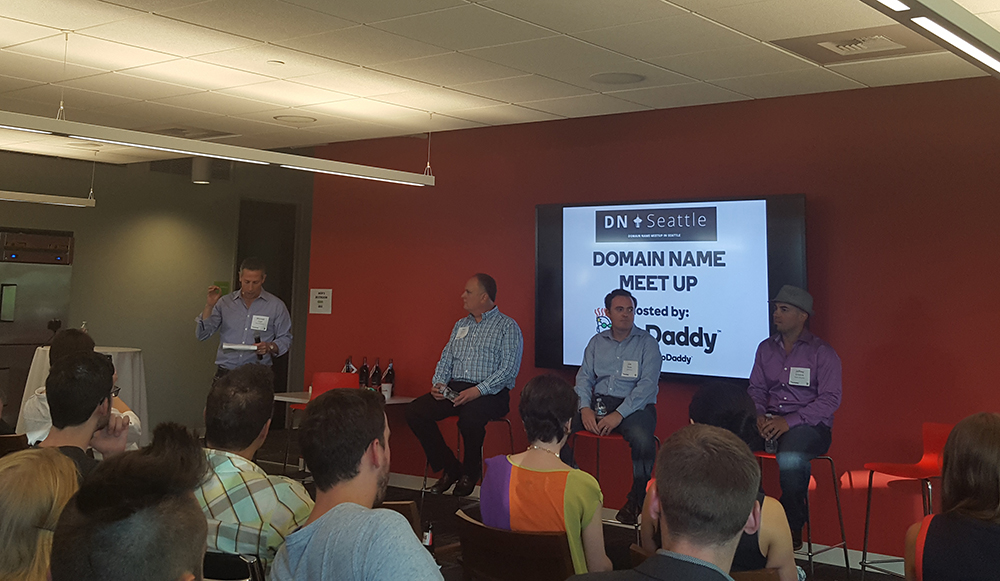 Mike Cyger addressed the audience with a thank you to the event sponsors (GoDaddy, Donuts, domainsponsor and Rightside, with prizes from EstiBot, domainIQ and DNAcademy) before introd
ucing the panel of speakers:

Jeffrey first outlined what exactly domain liquidity is: domains that will sell pretty much immediately once they go on the market. Even if you list high-value domains at 99c, it will go up to whatever the market wants. These are usually 3 letters, short domains. “I started investing in that, when you could get 3 letters for under 10 grand. Then I realized you could buy 4 letters for $15, there was a huge discrepancy in price.” Jeff also noted that the best thing about owning liquid domains is that when you come across another great deal, you can purge those liquid domains immediately in order to free up income to acquire that great find.

Mike pointed out that brandable domain names on BrandBucket (a service Jeff uses regularly) do have value but you need the right buyer to come along before you can start that negotiation. Whereas with 3 or 4 letter domains, those are the ones that always have value in the marketplace that you can auction off and sell at any time.

Joe expanded on the definition of liquidity by saying that if you sell within a week, that’s pretty liquid. Domains are not a commodity like a stock where you can just flip it. Dave emphasized that within a liquid marketplace you have have to have a lot of buyers and a lot of sellers. A premium domain broker can sometimes make a quick sale for a seller that wants liquidity, but overall it definitely takes a longer time the higher the price because there’s fewer buyers. Domains in general are really not liquid. The cheaper ones are closer to it, but not there yet. “I can sell a name for someone very quickly. Maybe 2-3 days, at a 20% reduction from what I could have after 3 months, maybe 30% if I have 6 months. The more time you have the more you can do on behalf of the seller.”

Mike asked Dave to elaborate on what really makes a domain name liquid. Dave responded that, generally speaking, lower end domains with a lot of appeal are the most liquid. Premiums would be closer to liquidity if they are appealing to more rather than fewer, but they’re too expensive. Short dotcoms are still king: one syllable, descriptive, easy to remember. Two or even three-word dotcoms that are descriptive and potentially good at generating business are next up. Certain verticals will appreciate better than others, such as insurance (hasn’t peaked yet), e-commerce and globalization.

Joe then noted the difference between micro trends and macro trends. Micro trends would include domains around events, such as the recent death of Prince or the upcoming US Presidential election. Macro trends are short numerics or letters. Joe himself will be watching different markets, such as India, as well as the new TLDs and how they take off.

One of the themes the continually emerged was that of supply and demand. In order for a marketplace to really boom, there has to be a high demand for valuable (or scarce) goods. As Jeff said, “scarcity is the most important influencer” when it comes to domain liquidity.

The panel discussed the 2015 rise in Chinese premium names, where there was a lot more demand than there was supply. Prices went up within a marketplace of many active buyers, however those trends have since cooled down considerably and the investors are watching China to see if there will be a resurgence of interest. Joe noted that there’s still a lot of liquidity in the market, lots of sales in the aftermarket, as there are always new businesses that are starting out that need a good name.

In terms of what’s next, Dave advised that Sedo is watching India, as this may be the next frontier for investors. All panelists agreed that they didn’t foresee any major changes coming up within the industry in the next year. Because liquidity in the Chinese market has already taken a big hit, “that shouldn’t drop too much more” said Joe. He also agreed that India is growing quickly and he’d be watching the investors there. “That’s where you really have watch. The tipping point in China was the investors who came in and put all that money into the market.” Keep an eye on the people can spend. Joe was keeping an eye on the country code .in, which seems to be growing in popularity in India with more .in’s coming online and advertising support, but .com is still king.

Mike took a few audience questions, including one posed by Greg from Google: How are domain prices determined, what market forces drive this? How much of domain is built by speculation, and how much is based on value of domain for someone who wants to use it to host a site.

Jeff replied that sites like lllsales.com can help determine value, it shows actual market value and brings attention to current trends. Market value is market value, based on conditions that day. As more companies come out with ways to track current sales, it will bring prices higher.

Dave had a different perspective, saying that domain valuation is highly subjective. He compared it to physical real estate. If you have ten townhouses on the same street, built at the same time, with slight differences, there’s public data and sales history. Good comparables. You can pretty much know within 5-10% what the house will go for. Domains don’t work this way. There’s no exact comp to work with. He also explained that when lower end domains are sold the prices are public, but once you get over $100k only about 10% of sales prices are published, and after $50k maybe 20%. You don’t have as much data. Homes also turn over much faster than domain names, which someone may sit on for 20 years. This also affects the available comps. Also: how motivated is the buyer? How knowledgeable? How motivated is the seller? Is the buyer wanting to flip? Is the business model backed by VCs that really want this name? The worth varies person to person. Depends on the domain: if it’s generic and common and there are comps available, it will be tighter. You could ask 10 brokers about a name, 5-6 will be tight, 1 way down, 1 on another planet, other 2 you don’t even know where they are. Appraisals from various sites will give you different numbers. “It’s subjective, and it’s not going to get much more scientific than that.”

If you’d like to view the full panel, the recording is available in Periscope!

Thanks again to Mike and all who participated for a great event, attendees learned a lot and it was a fantastic venue for networking. Remember, our super-secret, for-your-eyes-only discount link for $299 tickets is right here.